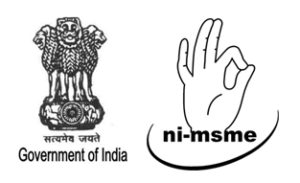 NI-MSME was originally set up as Central Industrial Extension Training Institute (CIETI) in New Delhi in 1960 as a Department under the Ministry of Industry and Commerce, Government of India. It was decided to keep it free from the tardy and impeding administrative controls and procedures, so that the Institute can play a pivotal role in the promotion of small enterprise. Therefore the Institute was shifted to Hyderabad in 1962, and was renamed as Small Industry Extension Training (SIET) Institute.

SIET was conferred the status of national institute by the Government of India with the charter of assisting in the promotion of Small Enterprises mainly by creating a pro-business environment. In 1984, the UNIDO had recognized SIET as an institute of meritorious performance under its Centers of Excellence Scheme subsequently, it was also accorded the national status in the same year and SIET Institute became nisiet. Since then the institute has come a long way, carving a place of distinction for itself in the domain of entrepreneurship promotion, achieving recognition both at the national level and in the international arena. To cope with the pressure of globalization, the Government of India has enacted the MSMED Bill in the Parliament, which became effective from 2nd October 2006. Accordingly, the Institute, in order to reflect the expanded focus of its objectives with name was rechristened as ni-msme from 11th April 2007 and re-desined its structure and organization. It is an organization of the Ministry of Micro, Small and Medium Enterprises (formerly Ministry of SSI & ARI), Government of India.

The ni-msme (formerly as SIET) was registered at Hyderabad in Andhra Pradesh under Public Societies Registration Act I of 1350 Fusil with effective from 1st July 1962.

In the year of 2015 we have tied-up with THREDZ IT Company as a business partner for the nimsme project and successfully completed the project at WARANGAL, ADILABAD and MAHABUBABAD-TELANGANA